Added 3 weeks ago by
5 Views
There are those who think that it was due to what happened in the water park of Restelo that Ondaparque closed. It wasn't - it was mismanagement.

Despite the love of the water park, so many years later there are still people who confuse its history with that of Aquaparque do Restelo, in Lisbon. In the summer of 1993, two children mysteriously disappeared in Aquaparque within two days. Their bodies were found on July 29 - they had been trapped in the pipes, which were only 27 centimeters in diameter. The water park closed immediately and was forever known as the “Aquaparque da death”.
It was one of the most important water parks in the country but has been abandoned for 22 years. Located in Trafaria, next to the IC20, the space was in operation between 1988 and 1996. For eight years, thousands of people chose Ondaparque to spend the summer - and we are not exaggerating the numbers, there are records of dates when more than seven thousand people in a single day. In general, the limit was five thousand.
With a total of 14 thousand square meters, it had six swimming pools, a restaurant, three bars and, at one point, even a kennel - which turned out to be a bad idea, since there were those who thought that this was the ideal place to abandon your animals. So many years later, the space is in ruins but there is still a lot of affection and nostalgia for Ondaparque
With a daily capacity for 5,000 people, the water park had its own radio station, music playing all the time, games in all pools, six in total, and lots of entertainment. In 1993, tickets cost 1,700 escudos for adults, the equivalent today, taking inflation into account, at € 19.29, according to Pordata. The kids paid 800 escudos, which they would give today € 6.94.
Right at the entrance there was a sequence of photographs taken in the park, where visitors could buy their favorite. At one point, there were even exotic animals here.
All Ondaparque pools were named after the equipment. The pool closest to the entrance was known as the Mushroom Pool and had a game that made the kids delirious: anyone who managed to climb to the top of the mushroom, and stay long enough to take a picture, received it free of charge.
“The surface was highly slippery, it was almost impossible. But it was not impossible! We have photographs of people who have managed to do so. ”
The pool immediately following was Caracol's, which, there, had a snail slide. Then came Lake B, which had various equipment - such as Slide Walls, two walls tilted at 63 degrees for people to slide; and Tranças, two closed and interlaced tubes measuring 64 meters in length. This was also the deepest pool, 1.5 meters deep.
Next came the swimming pool at Pistas Fofas. They were, the “queen of Ondaparque”: with a total of five tracks 50 meters long and 14 meters high, these tracks are still visible today from the IC20. In addition to these tracks, the pool also had the Kamikazes, the most vertiginous equipment in the water park.
The Cute Tracks acted as a neutral element. Unlike other diversions, which were associated with specific sponsors, these were sought after by various brands during shorter periods, usually at weekends. Some actions are still remembered today.
“I vaguely remember a Coca-Cola contest, in which they distributed small replicas of plastic grids, but the one that was perhaps more emblematic, other than Sega's, was effectively that of the yo-yos. It was an innovation: the only yo-yos that allowed us to do the 'doggy' trick, were Coca-Cola, Fanta and Sprite. ”
And Ondaparque had two more pools: one with three Tobogans, each with different levels of adrenaline (the one on the right side was more familiar; the one on the faster side; and the one on the left side was the more radical) and eight meters in length. height. Finally, we had the Multipath Pool, an equipment with eight lanes with 40 meters in length that provided a mind-boggling descent to the water with a depth of 1.20 meters. Since it wasn't so fast, it was more sought after by kids.
In addition to the pools, Ondaparque also had a restaurant with 43 seats inside and 58 outside and three support bars.

Occasionally, Ondaparque also hosted concerts - around 7:30 pm, people came back in to watch the shows. “They were memorable. The last had the Excess. I remember the 'Big Show Sic' program, which had Ana Malhoa. But perhaps the one that may have been one of the most emblematic was that of Gabriel the Thinker. ”

In order to continue creating my Videos, being able to travel and acquire the necessary material, any help is very important. Any type of donation, small or large, is welcome. Thank you very much. Please follow the link:
https://paypal.me/Helderhugo?locale.x=pt_PT 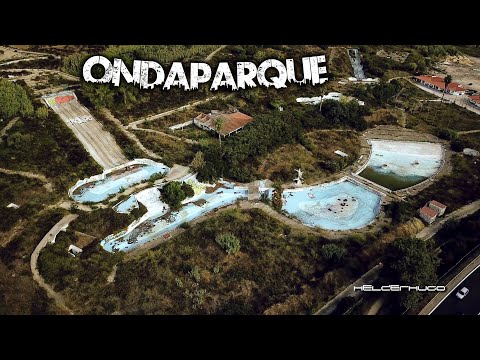 There are those who think that it was due to what happened in the water park of Restelo that Ondaparque closed. It wasn't - it was mismanagement. Onda...